If you want to make some serious power from your Mopar small-block, then this is the article for you. Big-inch stroker small-block Mopar engines have become very popular over the last several years. The big-inch Mopar craze really took off when the 4.000” stroke cranks were launched by Mopar Performance a couple of years ago. These new cranks made stroker engines affordable for most car guys who would never consider buying a $2,000 to $3,000 custom-made stroker crank.

This Tech Tip is From the Full Book, HOW TO BUILD BIG-INCH MOPAR SMALL-BLOCKS. For a comprehensive guide on this entire subject you can visit this link:

The basic design of the small-block Mopar is “made to be stroked” and is the easiest stroker engine to build using ordinary tools in your own garage.

This article covers the details of engine components like blocks, cranks, heads, cams, induction systems, and much more.

The engines and general recommendations in this book are geared for street engines in hot rods and muscle cars. Many of the concepts and procedures can also be used for street and strip or entry-level racing. Some of the engine packages are a little more involved and costly than what is normally used in a street cruiser or show car.

I consider any small-block Mopar engine with 371 cubic inches or larger a big-inch or stroker engine. The smallest stroker engine would be a 340 block using a 3.58” (360) stroke with a 4.060” bore size. Initially, the only way to make this combination was to take a 360 crank and turn down the main journals to the 340 size. This allowed the longer 360 stroke with the bigger bore 340 block. Today, this modification isn’t necessary since new stroker cranks are available with the small 340 mains. Some of these cranks are cast and are less expensive than the cost to modify a “used” 360 crank.

Stroker kits in Appendix A show stroker 318 engines, but these are pretty rare since most stroker customers want an engine larger than the stock 360 size. 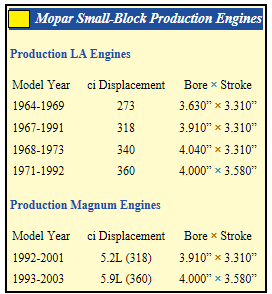 This Tech Tip is From the Full Book, HOW TO BUILD BIG-INCH MOPAR SMALL-BLOCKS. For a comprehensive guide on this entire subject you can visit this link:

Why LA and Magnum Engines are Shown in this Article

The 1964-’92 LA engines and 1992-’03 Magnum engines are very similar and their parts are interchangeable. You can use the same basic principles, parts, and processes to build an LA or Magnum stroker engine. Chrysler marketed the Magnum engines as being totally new and different, but they are really an LA with several updates to the oiling system, valve train, and cylinder heads.

In many cases the parts are interchangeable, but sometimes a subgroup of parts must be changed all at once. For example, Magnum heads can be used on an LA block, but you must also use the Magnum rocker arms, valves, valve gear, intake manifold, and valve covers. In some cases, like with the cylinder heads and pistons, using Magnum parts instead of LA parts gives you a performance advantage. 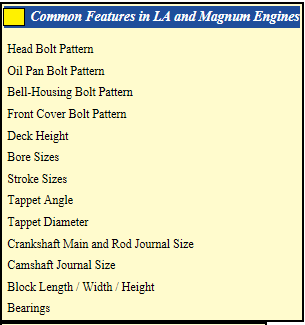 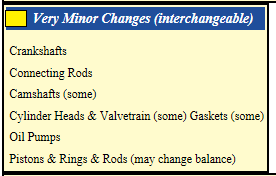 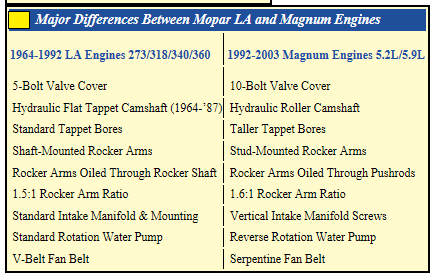 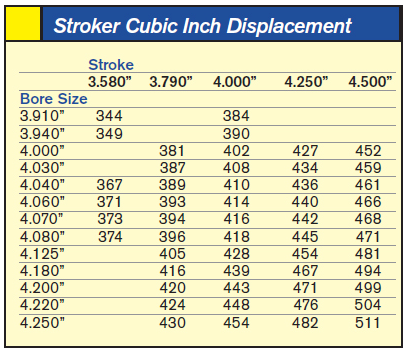 The two charts listed above detail some of the major similarities and differences between LA and Magnum engines.

Magnum engines are normally sized in liters (i.e., 5.2L and 5.9L), even though the bore and stroke of these two engines are the same size as the 318 and 360 LA engines.

Shop around for the best pricing and customer support on Mopar Performance Parts. The seller sets the pricing, creating quite a difference in prices. If you buy the parts from a local dealer or distributor and pick them up yourself, you won’t incur any shipping cost. If you buy a heavy item like an engine block or short block by mail order, you may be charged for freight.

Consider technical support when you buy parts. Some retailers provide rock-bottom pricing but don’t want to help you out after the sale. Other sellers provide great customer support, but need to charge a little more for the parts since good support staff can be expensive. Don’t expect customer support from someone who did not sell you the parts. Retailers are busy and don’t have time to help you out when you did not buy the parts from them in the first place.

Written by Jim Szilagyi and Posted with Permission of CarTechBooks

LEARN MORE ABOUT THIS BOOK! 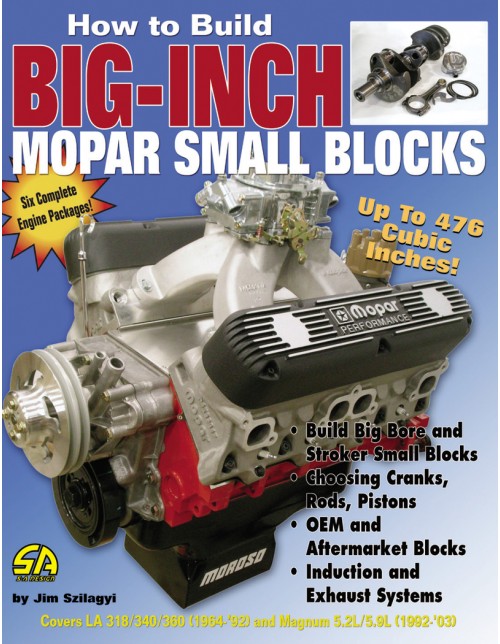 If you liked this article you will love the full book!