The A-833 was released for the 1964 production year. However, it had been in the works for some time. An important thing to keep in mind is that not every case has a clear casting date present on it. After handling thousands of these transmissions, it is evident that the greatest care was not taken in the identification department.

When there is just the month and day, it is to be assumed that the year of the vehicle is referenced for the year of the transmission man­ufacture. This was fine back in the day, but once these cars got to the age of recycling used components into them it throws a wrench into the identification. Let’s face it, a large percentage of the cars that are being restored have had major components replaced previously. 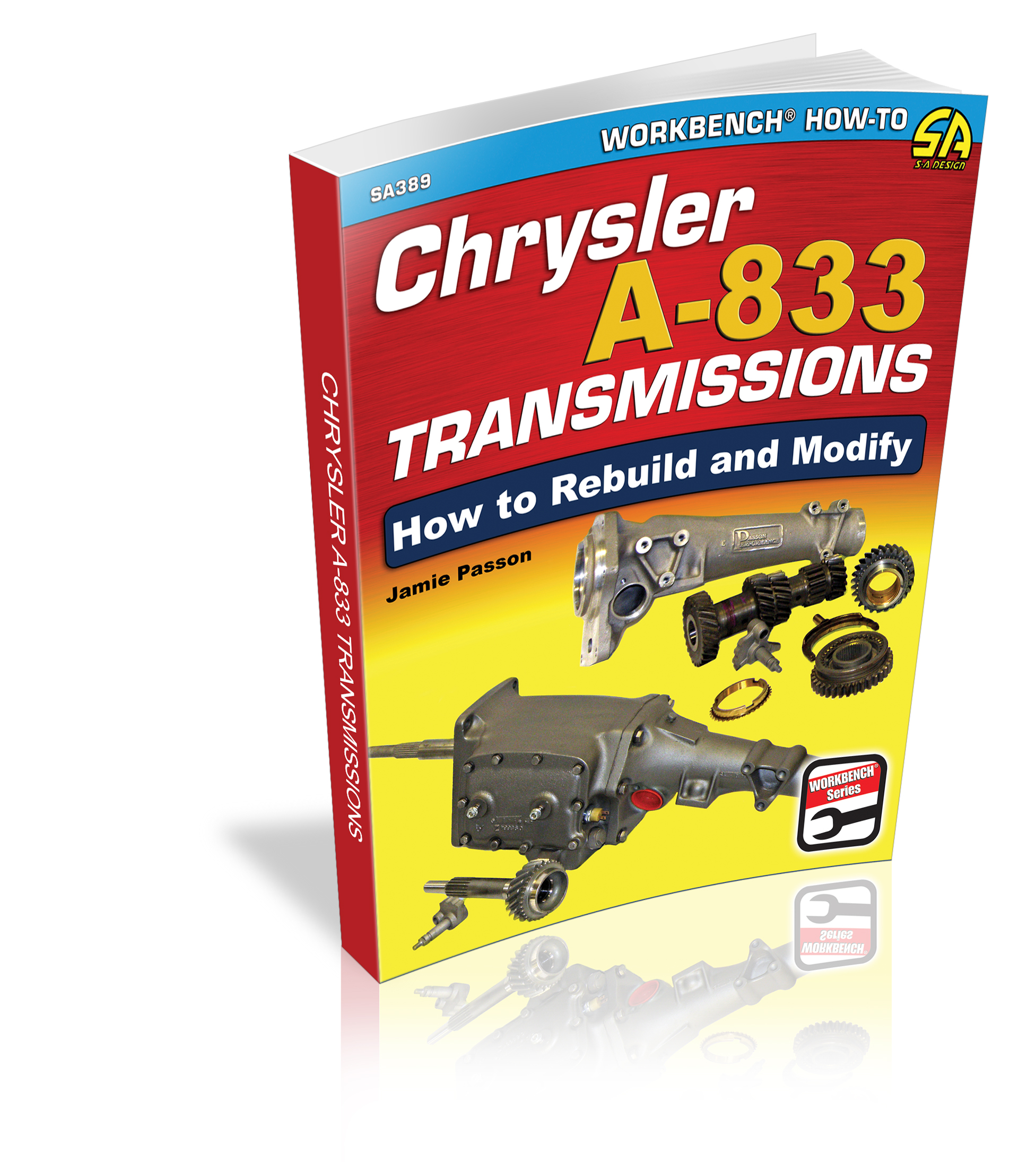 This Tech Tip is From the Full Book, CHRYSLER A-833 TRANSMISSIONS. For a comprehensive guide on this entire subject you can visit this link:

It can be difficult to deter­mine if the transmission has been changed in vehicles built prior to the federally mandated regulation of stamping the VIN into the major vehicle components. When consid­ering pre-1968 vehicles, it could be argued that if the casting date falls into the proper production window then it is the correct transmission.

Beginning in 1964, the main case had a casting number of C-95639. During this time, cases were machined for a 307 input shaft bearing and the date is below the casting number. This case does not have the raised VIN pad that is present on later cases.

Cases with casting number C-97372 were the first to receive the VIN pad on the passenger’s side just above the casting number. I have seen these cases dated back to late 1966 with no VIN pad. All of these cases were machined for a 307 input bearing. Although the pad was not machined or stamped, it tells me that this regu­lation may have been in the works for some time. This casting number was used until 1968.

Once the pad started to be machined, the casting number changed to C-97622. The pad was 7/8 inch tall and was 2¼ inches long. It was machined flat and stamped with the transmission assembly informa­tion at the New Process facility.

Along with a font change for 1969, the casting number changed yet again to C-99129. These cases were machined in both 307 and 308 input bearing sizes. The 308 bearing was used on the 18-spline (Hemi) 4-speed. The 307 bearing was used on the 23-spline version. Both the 18- and 23-spline transmissions used the C-99129 cast­ing number up until the end of the cast-iron main case production in 1976. Since it was just a machining difference, there was no need for a sep­arate casting.

In the mid-1970s, when the main case production changed to alumi­num, the case stayed generally the same. There was a casting number change again. C-13303 was the car type with the conventional reverse interlock detent position. C-13546 was used for the truck and van over­drive transmissions. The reverse interlock detent was moved to the sidecover on this unit.

“C” stood for “Casting.” All forgings were identified with an “F” for “Forging.”

Unlike other manufacturers, many different casting numbers were used on the A-833 4-speed trans­mission. Generally, different cast­ing numbers are for different body styles. However, in some instances, the casting number changed and there is really no difference between the two tailhousings. Like the cases, they generally begin with C-9XXXX. The later casting numbers started with C-1XXXX. They were predom­inantly made from gray cast iron. Some specialty tailhousings were cast in aluminum; some later ones were also cast from aluminum.

This tailhousing was used from 1964 to 1965 only. As you will notice, the shifter mount flange is all the way at the rear of the tailhousing. Since it is a ball and trunnion transmission, the flange is taken into account with regard to shifter location.

A fourth aluminum tailhousing was offered over the counter by Direct Connection. It lacks casting numbers. It weighs roughly half of its cast-iron assem­bly line counterpart.

The B-Body tailhousing ran from 1964 to 1974. It went through several configurations.

The two-year B-Body tailhousing had a casting num­ber of C-95919. It was different from the C-Body because of the distance between threaded transmission mount holes. It also had the ball and trunnion–style driveshaft attachment.

This Tech Tip is From the Full Book, CHRYSLER A-833 TRANSMISSIONS. For a comprehensive guide on this entire subject you can visit this link:

For the beginning of the 1970 production year, the B-Body cars received a tailhousing that had provisions for both transmission mount locations. This was a tran­sitional measure, as the transmission crossmembers were changing that year to be consistent with the auto­matics. This was an extremely limited production piece with a casting number of C-99621.

The 1964 and 1965 C-Body tailhousing had casting number C-95638. It had a ball and trunnion driveshaft attachment. The difference between the C-Body and B-Body tailhousing is the location of the attachment screw for the speedometer cable hold-down. Also the transmission mount holes are farther apart. This tail­housing was cast from gray iron. From 1966 to 1968, the C-Body shared the same tail as the B-Body.

For the remainder of 1970 to the end of produc­tion for the A-833, the tailhousing took casting number C-99539. This tailhousing was used in B- and E-Body cars, trucks, and vans until 1986. It can be used in any B- or E-Body car from 1964 and on with the proper crossmember and mount. These are not necessar­ily the factory configuration that is needed to make it work.

Beginning in 1968, the federal government required all major vehicle components to have the Vehicle Identi­fication Number (VIN) on them. The VIN started showing up on the A-833 transmissions in 1968. Chrysler began casting the pads in 1967. They were left unmachined at that time.

Several different casting numbers for the aluminum race cases and tailhousings were produced by Chrys­ler. Chrysler always went above and beyond to assist its factory-sponsored race teams whether it was NASCAR, drag racing, or road racing. The company went to great lengths to make sure that its teams had the best. The A-833 weighed nearly twice that of a GM Muncie transmission. The difference was that the A-833 was considerably stronger. So much so that many GM guys modified them to run in the GM cars.

Chrysler released aluminum components for the A-833 over the counter. Essentially, anyone could go to the parts counter and order an aluminum main case or tailhousing. Even complete transmissions were available in the same manner. Obviously, this helped give its teams the edge, and they were tremendously successful. ■

In 1968, New Process began to machine and stamp the pads with the assembly information. Then the actual VIN was stamped at the vehicle assem­bly plant. This formed two different “lines” of information. There was little continuity when this procedure first started. There were no holders for the stamps at the vehicle assembly plants. Therefore, the letters/numbers were not in a straight line. At the transmis­sion assembly plant, however, stamp holders were used from the start. This is evident by how evenly and straight the transmission assembly data is stamped. The initial year of VIN char­acters were a standard font.

Beginning in 1969, the characters became very narrow for their height. This was the case until the end of pro­duction. In addition, they were created at the vehicle assembly facilities so that the characters were stamped in a straight line. Some 1969 transmissions had the entire VIN on them. Most didn’t.

Service replacement transmissions also contained assembly information when it was assembled. The vehi­cle information was stamped by the dealer handling the warranty work. Many times this was not done prop­erly or even done at all.

Sometimes, cases were tampered with. To determine if a case was altered, there are a few things to check. First, take note of the length of the VIN pad, as that will determine the year of production. Next, look at the fonts used in the stamping. A standard type font was not used after 1969. Finally, check for grinding. If you can make out slight remnants of a VIN that was stamped under the current one, there may have been fraud.

Written by Jamie Passon and republished with permission of CarTech Inc

LEARN MORE ABOUT THIS BOOK!

If you liked this article you will love the full book!