Once the Gen III Hemi has been removed from the vehicle, the flexplate or flywheel has been removed, and the engine has been mounted to the engine stand, a proper teardown can begin. While you may not know the full history of the engine assembly, once mounted to the stand it would be obvious if it was a broken engine that had windowed the block. Other engine failures are not as obvious and the clues will unfold as you begin disassembly, so take your time.

For this article, we will walk you through removing the cylinder head on the Gen III Hemi.

1 Before you remove either head, look at the two exhaust faces. The bolt patterns are not the same on the center two exhaust ports. Also look inside the valve cover rail. There are four oil drain holes drilled next to the exhaust face (outside edge). These four holes are offset to one side, which makes the left head unique from the right head. This shows you that the two heads are not exactly the same and therefore are not interchangeable. You should label them as driver-side head (left side) and passenger-side head (right side). 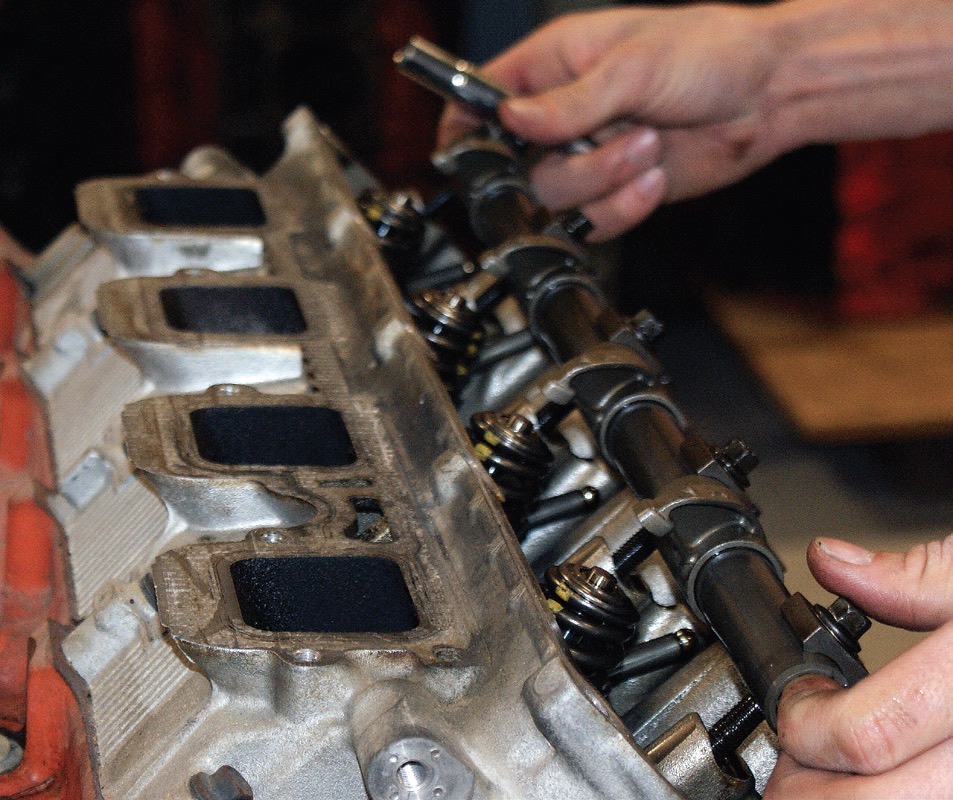 Each rocker shaft attaching bolt has a retainer (curved washer) under the head of the bolt. Do not remove the retainers from the shaft. Assembly tangs on the bottom of the retainers might be damaged. Once free of the mounting pedestals, lift upward and place in a safe area. 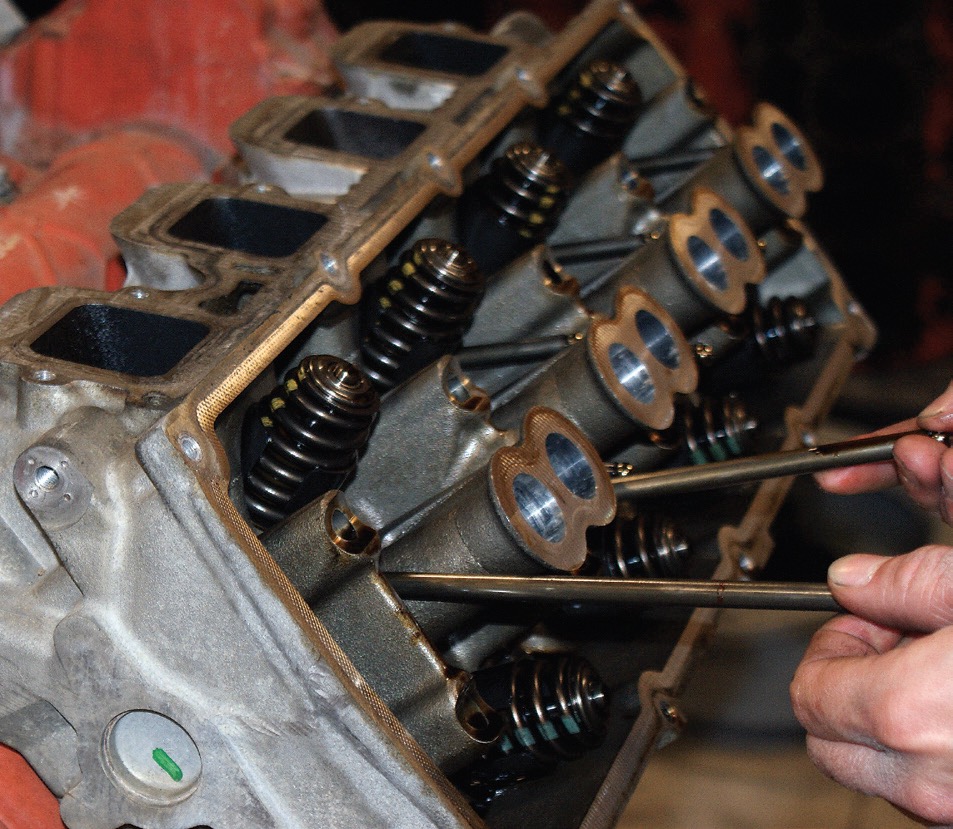 Remove the pushrods, which are 16 pieces. Note the location in the head and store them in an organizer by cylinder number. Longer pushrods are for the exhaust side rockers and the shorter ones are for the intakes. 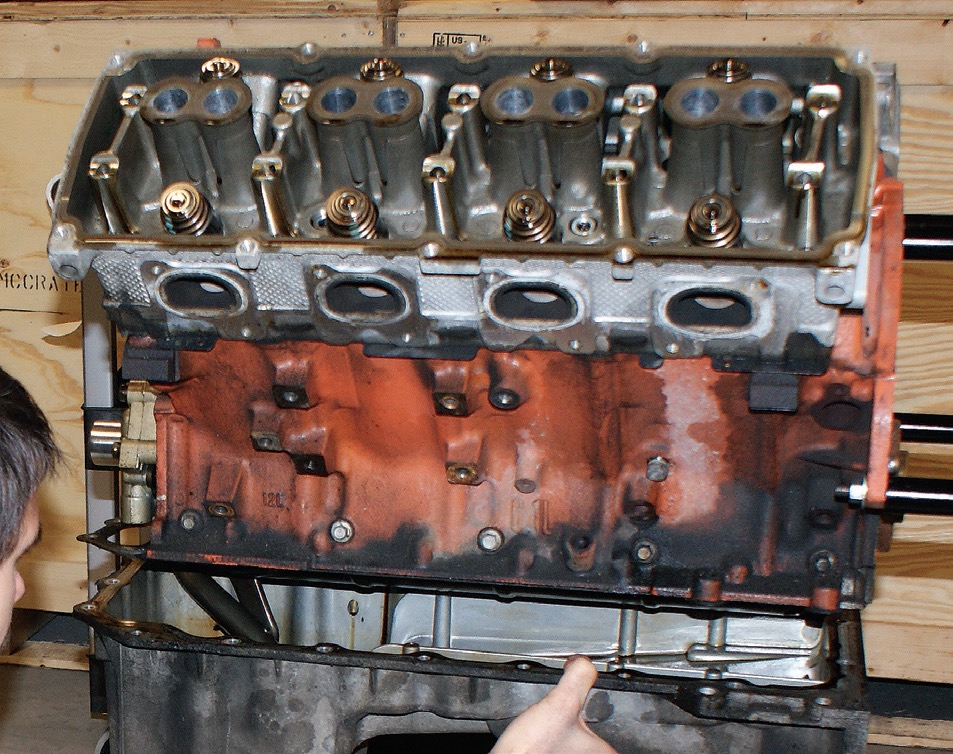 At this point, with the heads still on and the crank and oil pan down, you have a choice to make. Typically, you might remove the heads next and then flip the engine over to remove the pan and short-block hardware. However, you could choose to remove the oil pan, while it is still on the bottom. The advantage of removing the oil pan now is that any dirt that may be left in the pan is removed and cleaned. If the engine is rotated to the crank-up position, residual dirt can drop into the engine.

2 Remove head bolts. There are 10 large and 5 small bolts per head.

3 Loosen the cylinder heads. The Gen III heads are aluminum and weigh around 30 pounds for each head. The Gen II cast-iron heads were closer to 60 pounds each. You can usually break the head loose from the gasket seal by inserting the wooden or plastic handle of a hammer or mallet into the front intake port. Then switch to a rear port. Try to have the engine sitting straight up (normal position) during this process.

This Tech Tip is From the Full Book, NEW HEMI ENGINES 2003-PRESENT: HOW TO REBUILD. Here are some additional New Hemi books that may interest you as well! 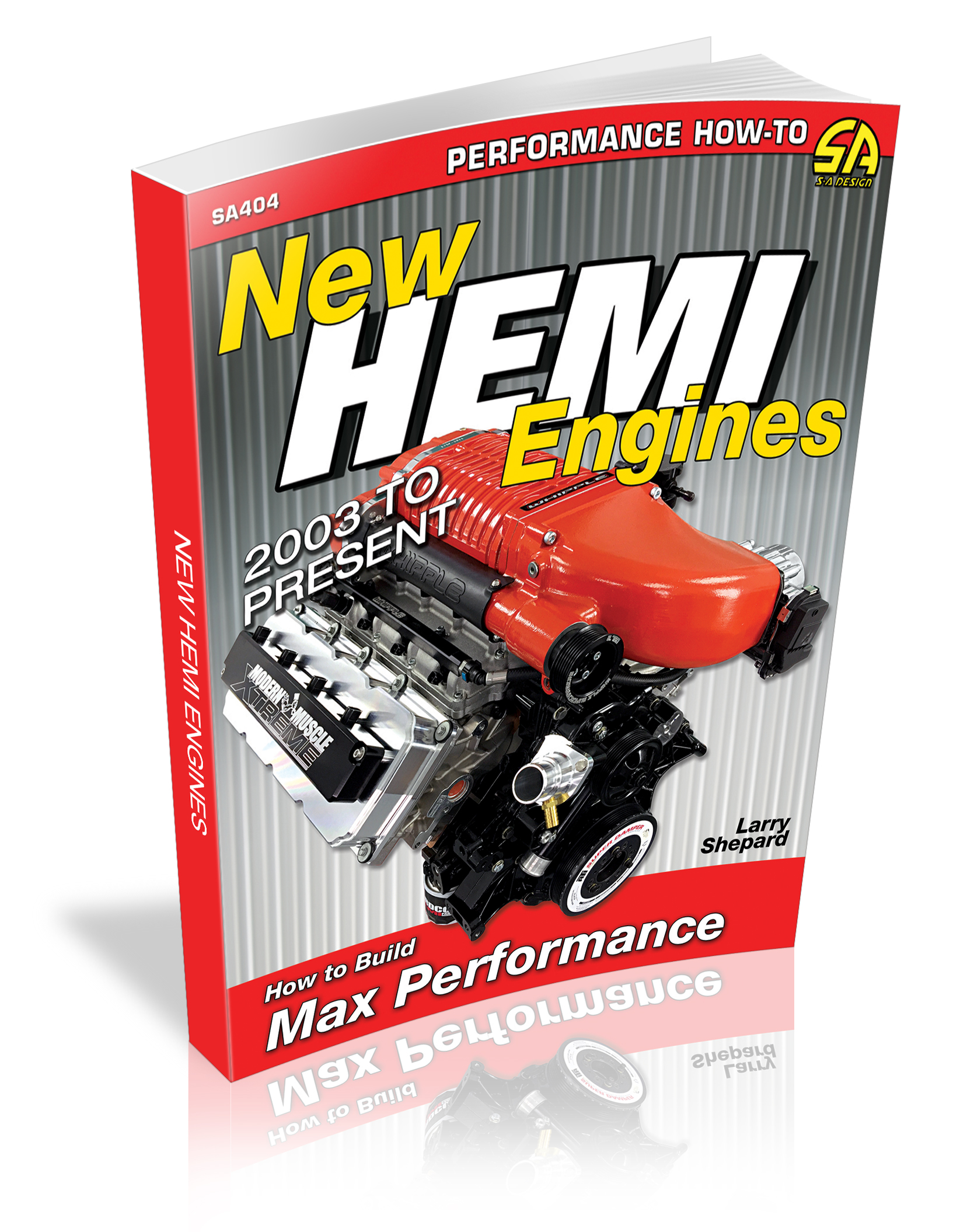 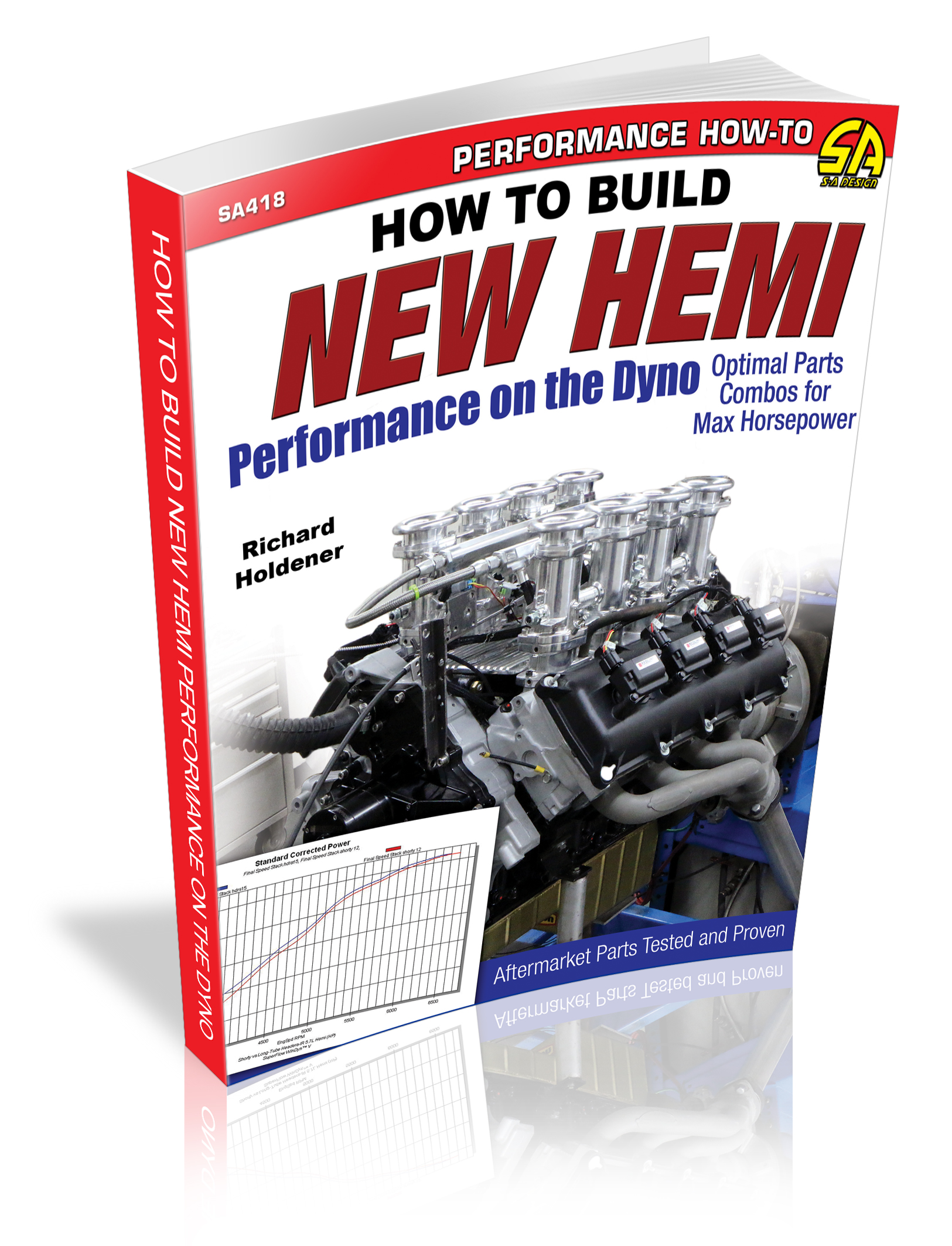 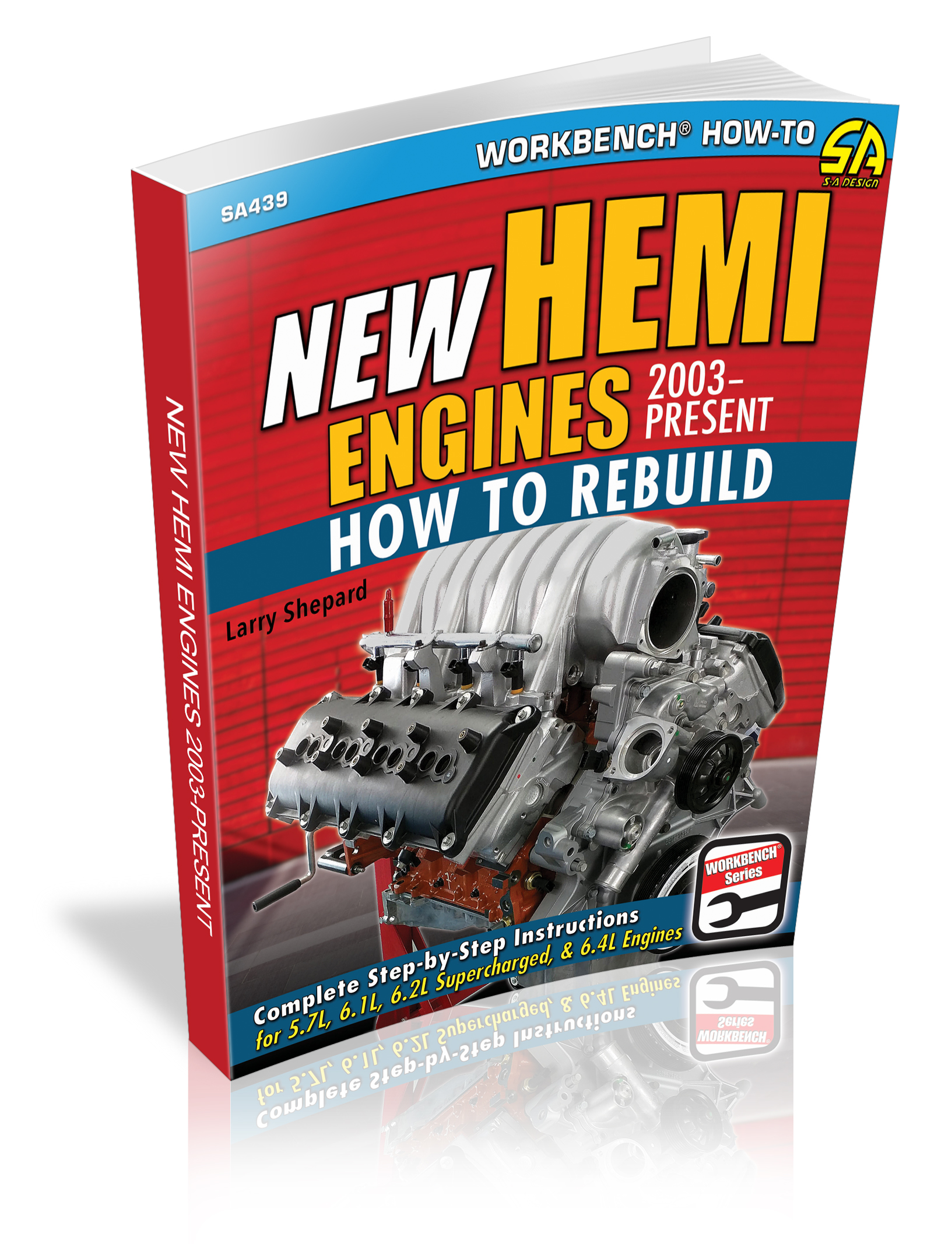 4 Once loose, there are two large dowels around the end head bolts (top row) that locate the head and hold it in place. Carefully lift the head upward and remove it. Place the head assemblies in a safe place.

5 Disassembly of the cylinder heads can be done later, but I include the steps in the next section.

2 Select one head and mount it securely to your workstation using brackets or stands (two pieces of 2×4 on edge or two metal brackets designed for cylinder head work). The best positions for the Hemi heads tend to be either on its side or with the retainers up.

3 Using a valve spring compressor, compress the spring and retainer and remove keepers (two per valve) from valve grooves and retainer. With the spring compressed (hold with one hand), the keepers will now sit above the retainer. Pick them off the valve stem with a hooked tool or your fingers. Place the keepers in an organizer. While initial engines used single-groove valves and keepers, most of the newer engines seem to use three-groove valves and keepers. Keepers must match grooves in the valve, so this should not be an issue unless you need new valves. 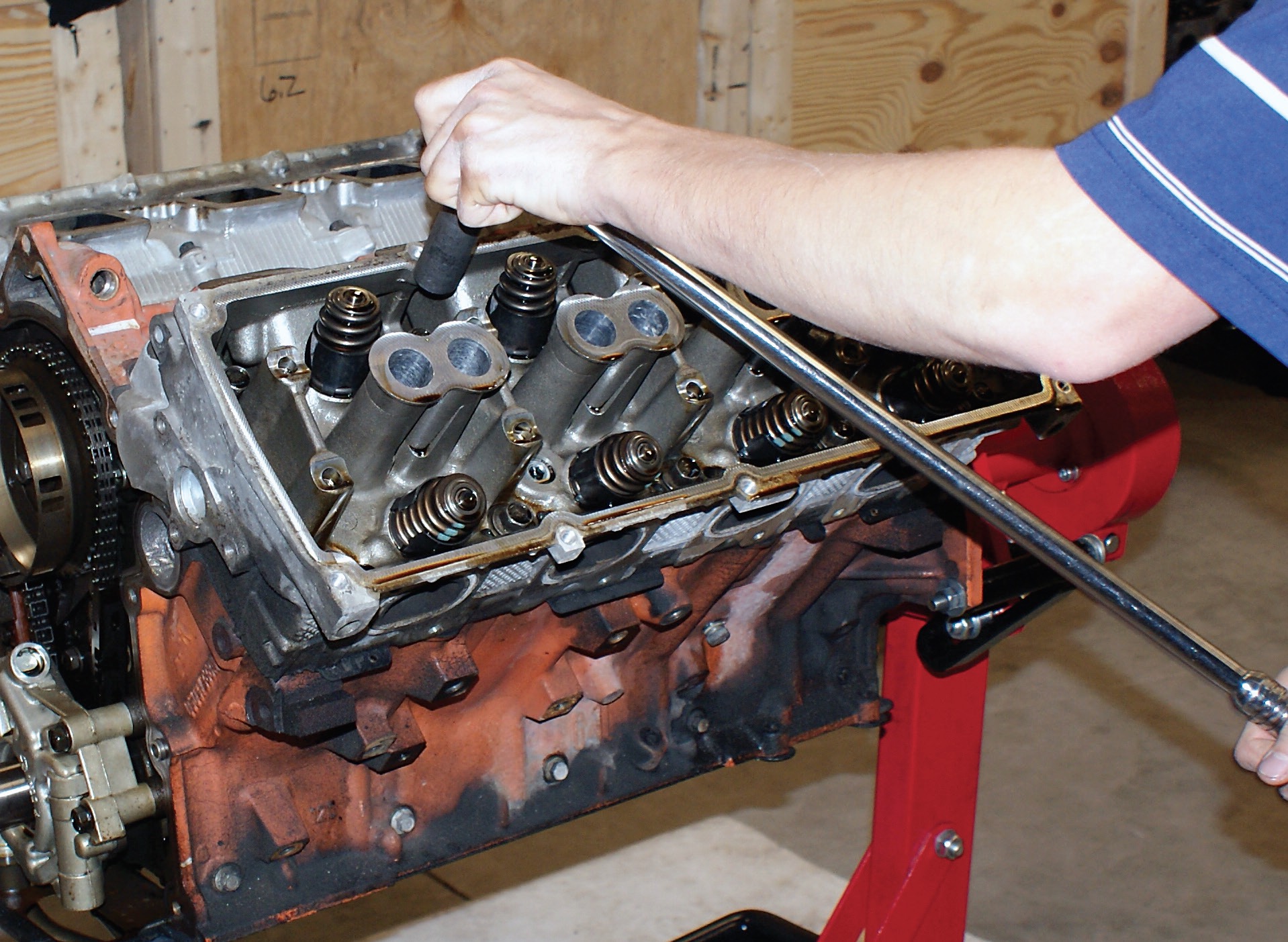 Remove the cylinder head bolts. There are 15 head bolts per head: 10 long (M12, large) and 5 small (M8). Use a 1/2-inch drive socket, a short extension, and a breaker bar to loosen the bolts, then switch to a 1/2-inch or 3/8-inch drive ratchet. Place all of the head bolts into a plastic bag and label them.

4 Release the spring compressor and set it aside. Without keepers, the retainer now sits above the end of the valve. Remove valve retainer and the valve spring by hand. The retainers tend to be small and flat on top (on left) and tapered underneath (on right). Keep these parts in order in the organizer if being reused. 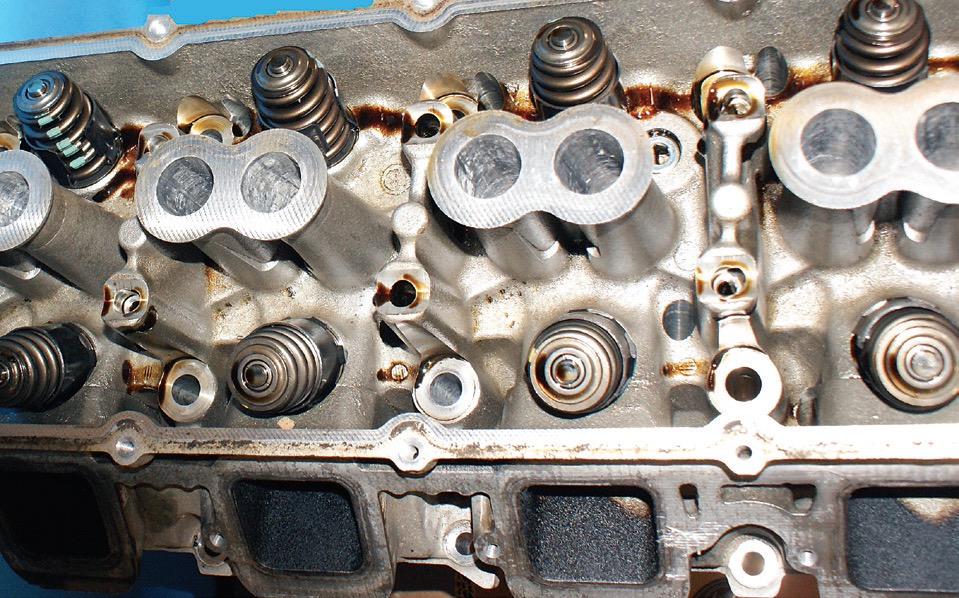 Select one head and mount it securely to your workstation using brackets or stands. Keep a valvetrain organizer within easy reach to hold springs, retainers, keepers, seals, and valves in order.

Used engines don’t have pretty, shiny combustion chambers and valves, but they can tell you a lot about the engine’s history and condition. It is good to look closely at all of these parts before you clean them too extensively. 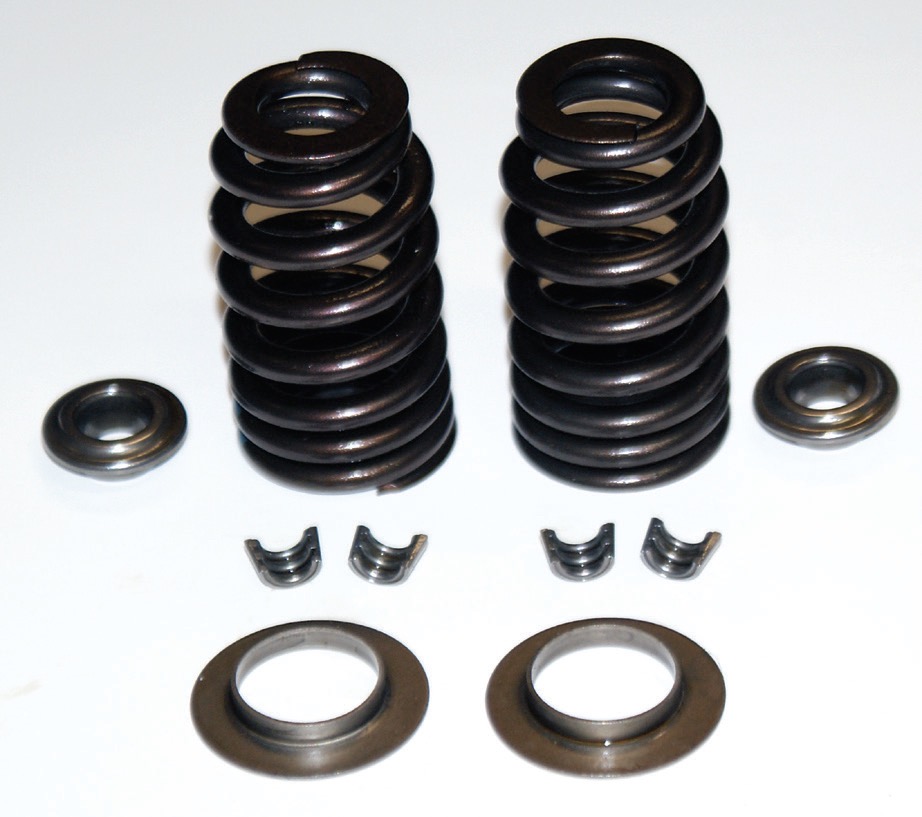 As you disassemble the cylinder head, you will end up with two valve springs (center), two small retainers (left and right of the springs), four locks or keepers (below the spring), and two shims or spring seats (bottom). There are two styles of shims, and the 2009 and newer style is shown.

5 Repeat this procedure for the opposite valve in the same cylinder.

6 Remove the valve seal on the valve guide. Check for a difference in intake and exhaust seals; they may be the same. Inspect and discard it.

7 Repeat this process for the other three cylinders in this head and then repeat for the second head.

8 Check each spring seat in the head for a shim. A typical spring shim is a 0.030-inch, 0.045-inch, or 0.060-inch thick flat washer, while the two OEM Hemi shims are both 0.040-inch washers. The shim is designed to fit between the bottom of the valve spring and the spring seat in the head. It tends to stay with the head when the spring is removed. Look carefully! They were used in all of these engines but there are two styles: the T-shaped shim (installed upside-down) was used in the 6.4L 392 engines and a one-piece shim-and-seal was used in the 2003–2008 5.7L. Remove and add to the organizer. 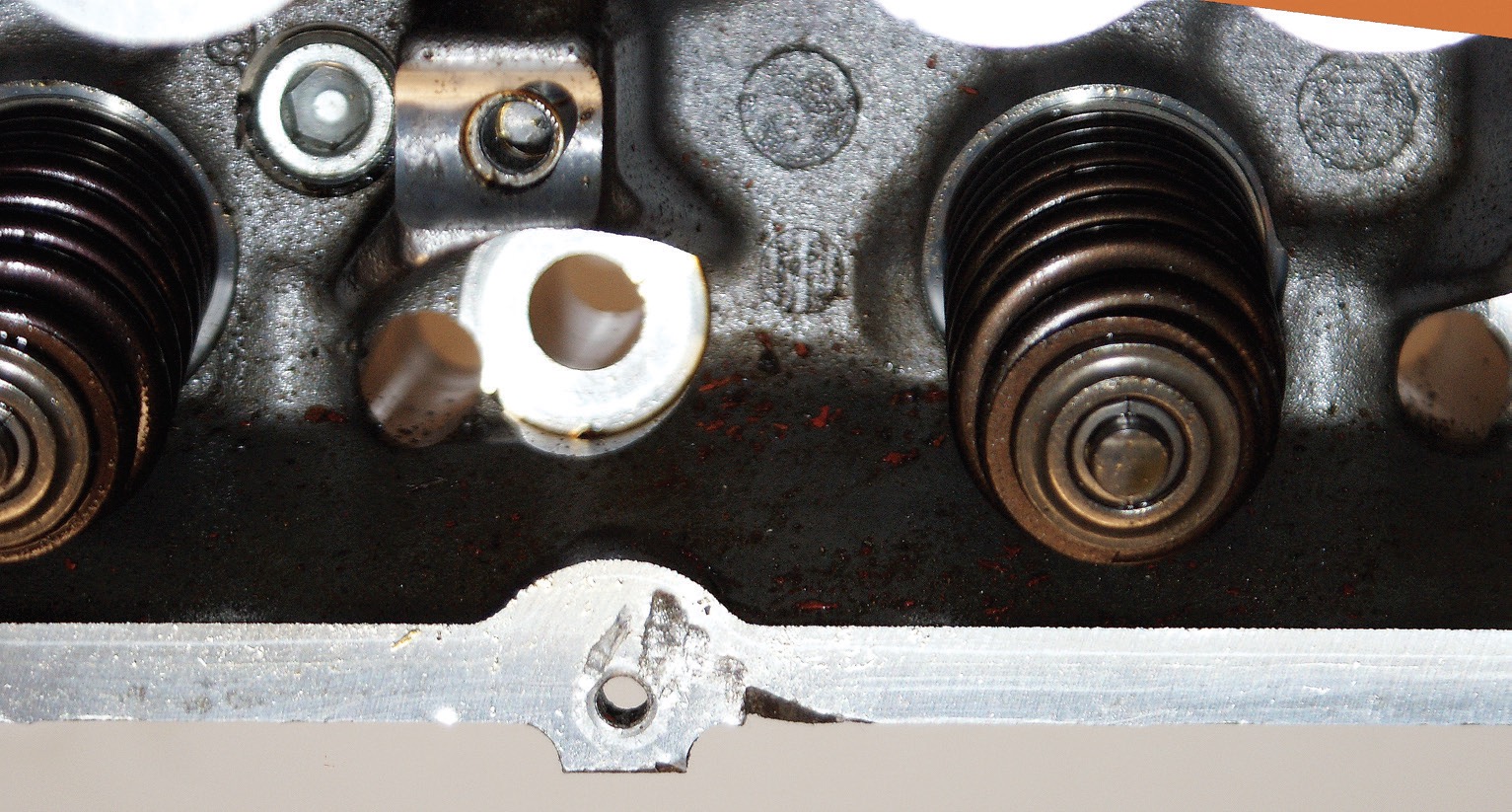 Select a socket that is slightly smaller than the outside diameter (OD) of the valve spring retainer. The Gen III Hemi engines use a small diameter retainer. Place the socket on the retainer and strike the socket sharply with a hammer to loosen the keepers from retainer. Repeat for each valve (four intake and four exhaust per head). 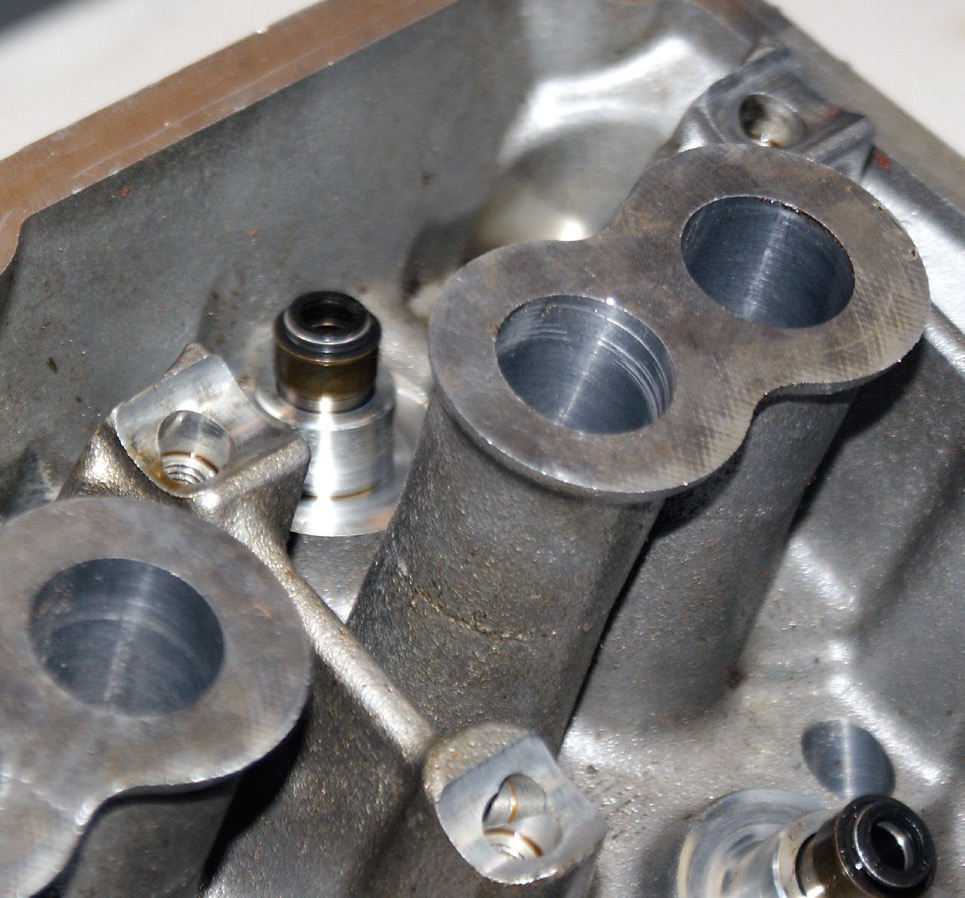 Typically, the valve seal stays attached to the valve guide when the valves are removed (upper left and lower right). The early 5.7L and 6.1L engines used a one-piece valve seal and shim. The newer seal used from 2009 and on is shown.

A Note About Beehive Valve Springs:
All Gen III Hemi production valve springs are considered beehive springs. By definition, the beehive or conical valve spring is smaller at the top than it is at the bottom. All Gen III Hemi engines use beehive springs, but they are not the same from one engine to another. For example, the springs cannot be interchanged between the 5.7L and the 6.4L.

For a rebuild, assuming that you do not find any broken springs, wash and bag the springs. An optional step is to load check the springs. You can sit two beehive springs next to each other, touching at the bottom, as long as they are sitting on a flat surface, and the springs have a gap between the springs at the top.

9 Prepare to remove the valves. The head must be sitting a few inches above the workbench to remove the valves smoothly. If the brackets or 2×4 blocks do not allow enough room, add more spacers to raise the head for more clearance. You will slide the valve down the guide, through the head, and out the chamber side. Consider placing the head on its side for easier valve removal.

12 To remove the valve, slide it down the guide and out the chamber side. Place each valve in the organizer in its proper place. For example, the number-1 intake valve is placed in the number-1 cylinder location.

1 Inspect the sealing rings around each head gasket chamber and check for leaks. The Gen III Hemi was introduced in 2003, so it benefited from all the high-output engine development that was put into the earlier small-block and B/RB wedge gasket designs. This means that the production Gen III Hemi engines have a very good high-performance head gasket. These designs are generally called multi-layer steel (MLS) gaskets. These gaskets feature a top piece and a bottom piece with a different material in between. They seal the engines very well. There are also several bore sizes for these gaskets based on the block’s actual bore size.

3 Pull the tappets out of the guide holders with a twisting motion. It is important to keep them in order. The MDS engines have two different types of tappets per holder, and the two types cannot be swapped. They only go into the guide one way, and the MDS tappet only goes in the MDS location in the guide.

Once the heads have been removed, check the head gaskets (typically they stay with the block when the head is removed). Note the five oil drainback holes and the two oiling holes to the heads and valvetrain. 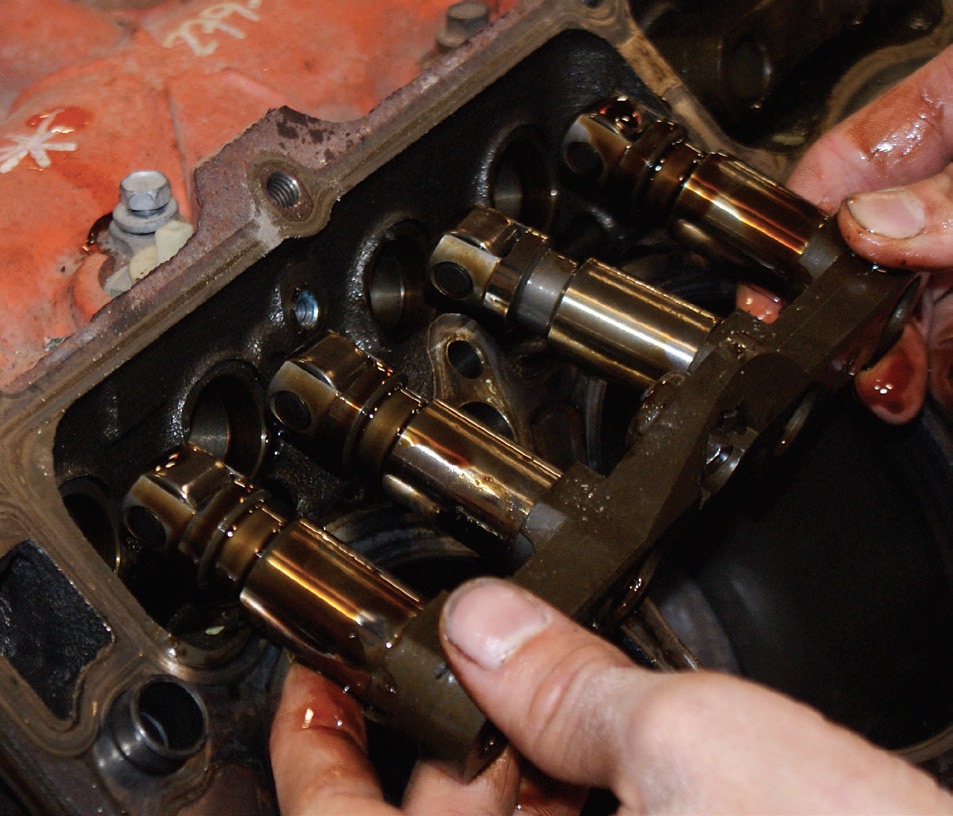 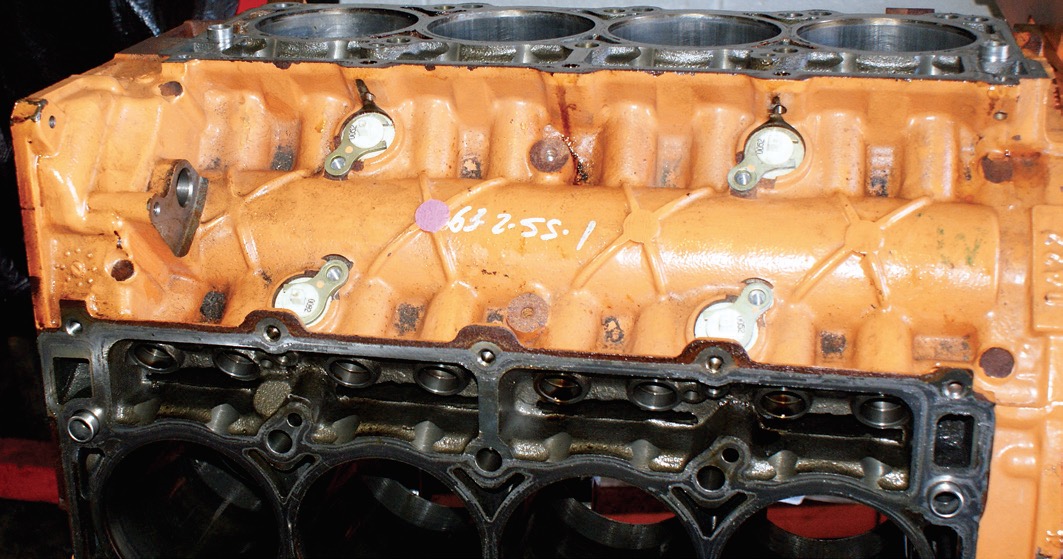 There are four MDS solenoids in the tappet cover between the heads. The holes are machined on all blocks and plugged (as shown) on the non-MDS blocks such as the 6.1L. The plug is held in place by the same bolt as the solenoid.

Written by Larry Shepard and republished with permission of CarTech Inc

LEARN MORE ABOUT THESE BOOKS!

If you liked this article you will love the full book!  Click on a book for more information!